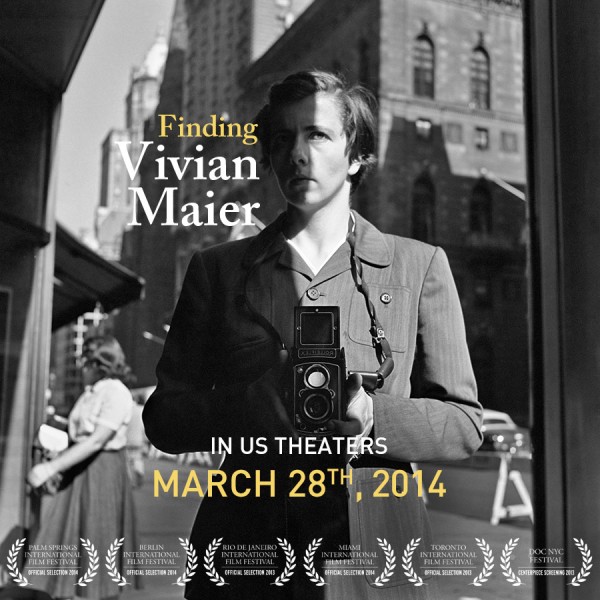 I was lucky enough to see the documentary Finding Vivian Maier during opening weekend at the IFC Center movie house in New York City. I also managed to attend a viewing when the co-director, John Maloof spoke. For those of you who know me, yes, I was front row, center for the showing and for his lecture. And, as you can tell below, I bought his book. What a wonderful story.

Who is Vivian Maier? She was a professional nanny in Chicago’s North Shore. From the 1950s until the 1990s she took well over 100,000 images, but didn’t show her street photography to a single soul. In 2007 her storage locker was sold off at auction after payments weren’t made. John Maloof, a Chicago-area history buff, bid on  and won a box of Vivian’s 100,000 negatives, movie footage, and 2,700 rolls of undeveloped rolls of film. He paid $380. John attempted to find Vivian, but to no avail. Finally her work has been discovered, shown in galleries, and this documentary is just out, all after her 2009 death.

What a story this is. Please scroll down and take a look at the movie trailer. You will want to run out and see this movie in a town near you.

Some of my favorite images by Vivian Maier follow.

I have enjoyed artsy.net, a Vivian Maier resource site. Check it out to see 80+ images of her works, exclusive articles about Vivian Maier, as well as her up-to-date exhibitions – it’s a unique Maier resource.

The share buttons are below. I would really appreciate having you share the post with your readers and friends. My readers are still in awe of this story. Thank you.

I love making photographs, cultivating curiosity and inspiring others to engage in continuous learning, discovery and finding delight. I look for inspiration in my own backyard in New York City, and Connecticut, as well as traveling abroad.

I run Moon PR, a boutique Public Relations and Social Media Firm where I have worked on projects as diverse as Microsoft, the Aspetuck Land Trust, and the Hampton Classic Horse Show. I also sell photographs from my adventures in Cuba, Africa, Spain and more in my print shop.